We finally boarded our plane bound for London at 23:30pm.

We didn’t take-off until midnight, on account of the fact that Athens Air Traffic Control wouldn’t let us leave until an amended route had been finalized. The captain explained to us that the aircraft and crew had been cobbled together at the last minute, since the original aircraft couldn’t be repaired in a reasonable time (faulty fuel gauge). Air turbulence on the originally planned route meant that they needed to negotiate a slight alteration/diversion.

Also; the aircraft was smaller than the original (200 seats instead of 260), which meant that some folks didn’t get a seat at all. Luckily for us, the Swan Hellenic group got priority. There was a mild brown-trouser moment at check-in, when we were told by the check-in clerk that Tracey wasn’t on the Swan Hellenic list (due, we assume, to the fact that her booking had been added later than mine), and that she was ‘on reserve’. We both looked at one another, a mutual sinking-feeling creeping over our weary faces, thinking; how much worse could this get? Fortunately, a small number of passengers had accepted the offer of a night in a hotel and an alternative flight on the following day, which meant the clerk, after some considerable discussion, could give Tracey a seat after all (pheeeeew!!!!!!)

We landed at a very quiet, and almost deserted, Heathrow Airport at approximately 1:30am. Due to the lateness of the hour, our Hoppa bus tickets were worthless (they stop running at 11:30pm), so we had to take a 15-minute taxi-ride to the airport to pick up our car… which cost us a whacking £30!!!

It’s a long way to North Yorkshire from Heathrow Airport. We arrived safely home at 6:10am on Tuesday morning… tired… but happy to be home.

Best laid plans of mice and men n’ all that….

After almost a whole day of waiting for disembarkation from the ship, we arrived at Athens to the news that our 6:30pm flight has been delayed. Due to a technical fault (which we believe was a faulty fuel gauge), the outbound flight from Heathrow had to turn back, and our new boarding time is now 11pm!

British Airways have checked everyone in and issued passengers with a meal voucher. I’m writing this in the airport cafe on my phone. At least the wi-fi is free!

This is a postscript to the voyage, written in the Orpheous Lounge on Monday morning, overlooking Piraeus Harbour, awaiting the call for disembarkation, which, for us, won’t come until 3:15pm this afternoon. An hour’s bus ride to Athens airport will be followed by a further two hour wait for our British Airways flight which is due to leave at 6:30pm. It’s a four-hour flight; when the time is adjusted, however, it means that we’ll arrive in Heathrow Airport at around 8:30pm, UK time. It shouldn’t take more than about a half an hour to ride the Hoppa Bus back to the hotel where our car is waiting for us. A four and a half hour journey should bring us home at around 1:30am tomorrow morning. A long day, then.

Barring any unforseen incidents, I expect this to be my final post until the next cruise assignment, which will be back on the Marco Polo next month, to the Canary Islands.

To all of you out there who have been reading the blog; I hope that it’s been as enjoyable an adventure for you as it has been for me (I see the stats, so I know that there’s a fair number of readers). See you on the Marco Polo…

This morning, we passed through the ancient, and rather awesome, Corinth Canal. At roughly 3 miles in length, it provides a convenient shortcut from the Ionian Sea back into the Aegean Sea, and to Athens, our starting point.

I plan to google the Corinth Canal when I get home, to learn more about it. It’s an absolute marvel of engineering, raising all sorts of questions; who, when and how did they build it?; how long did it take, and how many men undertook the task? Not to mention; How much did it cost?

As far as I do know, it was started by the Romans who failed to complete it; slaves would carry the ships over the middle, highest section – now that would have been quite a sight to see…

In terms of size, the Minerva must be at the maximum end of vessel-width when it comes to what can actually pass through the canal. It’s sides are tall and steep, and at its narrowest points, there were barely a couple of metres to spare. Quite a spectacular experience! 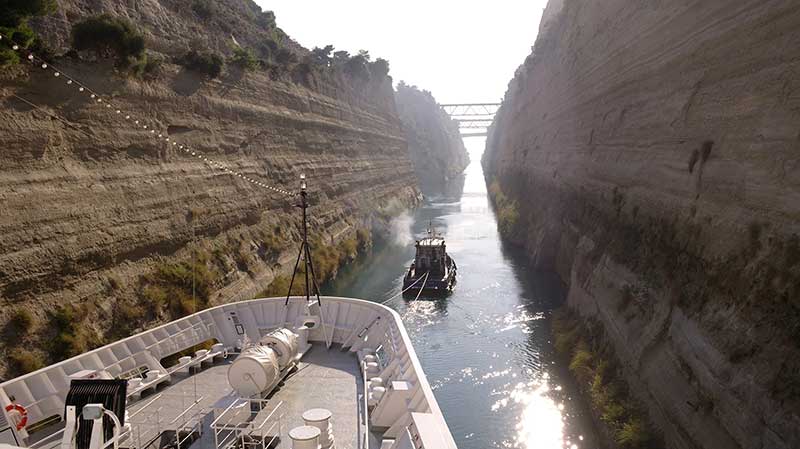 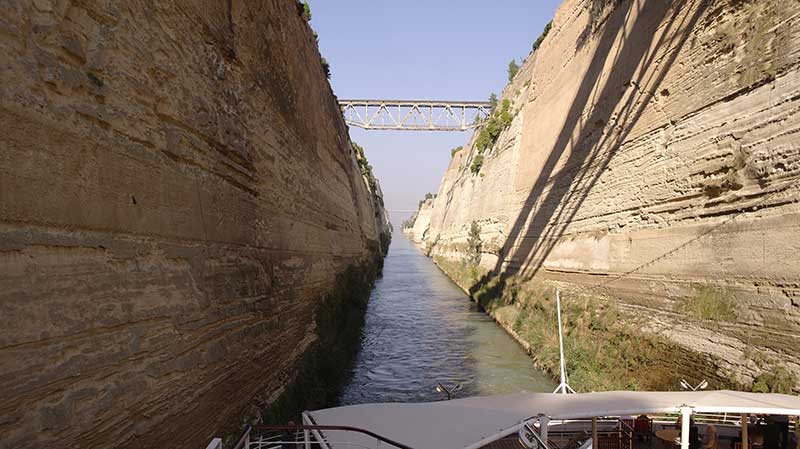 The depth of the canal fluctuates; today, the water was quite low, the captain explained, which meant that instead of the permitted, more common, 8 knots maximum speed, we were reduced to only one knot (occasionally half a knot’s crawl); the whole transit took almost 3 hours from start to finish.

As a consequence of our slow canal transit, we were late arriving in Piraeus. You’d think that the immigration officials would have been standing on the quayside waiting for us, but sadly that was not meant to be; a further delay (waiting for the ship to be cleared) meant that our final tour of the cruise was late in leaving.

The tour was a 90-minute coach ride to visit a temple, where we would stay for about an hour before returning back to the ship. That would be another 90-minute drive, then, totalling 4 hours – 3 hours sitting on a coach.

I have to say that when we finally arrived, it was well worth it. Another delay occurred as guides went off to organise the tickets for everyone on the five coaches (that’s a lot of people), but finally, we ascended the steps to view the Temple of Athena at close quarters. 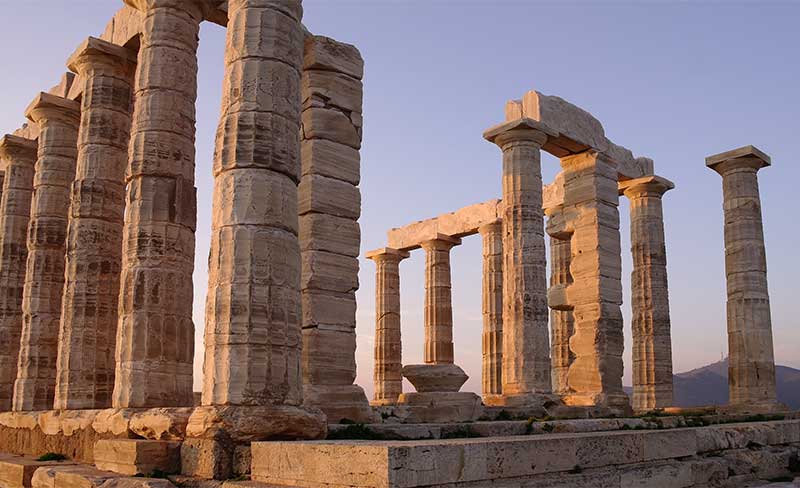 All the delays meant that we were there as the sun was setting over the Aegean Sea, making the light rather perfect.

The journey back to the ship took a little longer than ninety minutes; we encountered heavy traffic as we approached Piraeus, meaning that we didn’t get back on board until 7:15pm.

It had been a long day, but very interesting; the Corinth Canal and the Temple of Athena providing a fitting end to what has been a very enjoyable two-week trip around the Landscapes of the Mediterranean.

Today, we arrive in Sarande, on the coast of Albania.

Albania is one of those places that I would have struggled to point to on a map of the world. I now know that it is located just North of Mainland Greece, and sandwiched between Macedonia in the east and Montenegro in the North, at roughly the meeting point between The Adriatic and Ionian Seas. Just a few miles off the coast of Albania, to the West, and clearly visible from Sarande, is the island of Corfu.

As it was only a half-day visit, and we didn’t have any tour escorting duties this morning, we simply chose to take a walk along the seafront that curved around the bay.

Despite there being a few more high-rise buildings than we’d prefer, we rather liked Sarande. Albania is clearly an emerging holiday destination, having the feel of a place that welcomes visitors but hasn’t quite worked out exactly how to do it yet. There seemed to be a lot of Albanian visitors too, in much the same way that we might have a day trip to Whitby, although we also noticed that it felt very male dominated, with large groups of men, doing man-things.

Once we decided we’d walked far enough, we sat down at a shoreside bar and had a relaxing drink before heading back the way we’d come. We sat and mused over our drinks whether or not they took euros, and thinking that we should probably have asked before ordering, deciding finally that they would because the vendors on the sea front that we’d passed were all asking for euros. However; when I went to pay, the man behind the bar handed me a bill for 300 something-or-others. I held up a 5-euro note, saying ‘euros?’, to which he picked up a calculator and told me that it would be 2 euros and 20 cents… not bad for a Sprite and an iced coffee. When I handed him the note, he started peeling off foreign currency by way of change… I shook my head and insisted that he just keep the whole 5 euros; I really didn’t want a pocketful of money that I was unlikely to be able to spend. He seemed grateful, and as I walked away, I wondered if that was a ploy he employed with all euro-wielding customers…

This afternoon, I held my final workshop, in which we painted a seascape, creating seaspray with sandpaper. It all seemed to go down well, and folks thanked me for the classes as they left. As we have a rather busy day scheduled for tomorrow, an exhibition isn’t really very feasible, so I can say that my work here is done.

In the evening, it was another formal night. I’m not a fan, as you know, but the free wine rather makes up for it, along with the fact that Tracey and I also managed to bag a table for two.