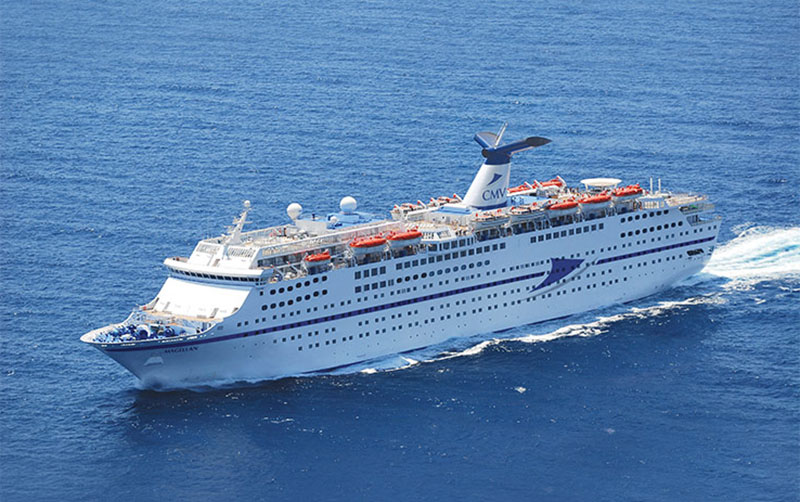 I’m pleased to be able to announce that I have just had three new cruise assignments confirmed for 2018.

In January 2018, I will be returning to The Amazon and West Indies (this will be my seventh visit) on the MV Magellan… very excited about that, of course; it means I’ll get to visit Iles Du Salut again – possibly my all-time favourite cruise destination…

Finally; later in the year, I will be embarking on a ‘Mediterranean Odyssey’, once again on the good ship Magellan.

Before all of that, though, I’m looking forward to a return to Norway at the end of this month (on the Magellan), when we’ll be chasing the Northern Lights…

I recently had a chat in a comfy chair with Julie Peasgood, for the TV Cruise Channel (Sky Digital channel 261 from 7am to 7pm every day)…

Today, we arrived in Manta, Ecuador, and our first tour escorting duty of the cruise. Manta is the Tuna Capital of the world, apparently, and just to emphasise that point, a huge netful of tuna was being lifted from a fishing vessel to the back of a truck just as we came down the gangway after breakfast.

Tracey and I were on the quayside at 8:30am, introducing ourselves to the local guides and counting passengers onto the coaches bound for Machalilla National Park.

It was a long two-hour drive. The scenery was pleasant enough; mostly coastal, but as we neared our destination, the forests became more abundant and the surrounding mountains became higher.

Once at our destination, the passengers were split up into two groups according to their walking preferences. They were invited to either join the ‘Short Walk’ group or the ‘Hiking’ group. We agreed that I should escort the hiking group.

Before going any further, I should say that if past experience has taught me one thing, it is that the definition of ‘hike’ is flexible, and means different things to different people. The guide had given us a pep-talk in preparation for the experience, recommending that we take lots of water and slap on the sun cream and insect repellant in readines for our impending rainforest experience. We were going to hike to the Sulphur Lagoon, and be fording the creek several times; it was going to be arduous, but the rewards were potentially plentiful; the rainforest is home to many species of wildlife, and exotic birds… the anticipation was almost unbearable.

It’s little wonder then that most of the group seemed quite underwhelmed by it all. We mostly followed a dusty farm track for about half a mile at the most. The only wildlife we saw were some pigs, African cows and a small group of goats. The image I had of how brilliant the Sulphur Lagoon was going to be, in such a wild and natural environment, couldn’t have been more spectacularly broken. To say it was a crushing disappointment when we finally got there would be a massive understatement.

For sure, the lagoon couldn’t be anything other than natural, but its resemblance to a manufactured swimming pool, totally circular in shape, bordered by a wooden fence and finished off with a couple of small jetties populated by groups of visiting bathers, seemed nothing more than a grand ‘Centre Parcs’ attraction. There had been no crossing of creeks and very little in the wildlife department. It turns out that the ‘short walk’ group were split down further, into two groups. One group walked the same dusty track as the hikers, but only half the distance – not as far as the lagoon. The other ‘short walk’ group were taken on a much rougher path that had them fording the creek not once but twice… they’d seen all sorts of wildlife in the company of a guide who really knew his stuff… they had a fantastic time, by all accounts!

The second part of the day’s excursion was a beach break.

We’d all been issued packed lunches (another crushing disappointment, but I’m not at liberty to expand upon that), and herded into the secure grounds of a posh hotel, manned by a security guard wearing body armour and sporting a gun, and fenced-off from the the beach by what must have been easily 10-foot tall, heavy-duty metal fencing.

Despite these things, the couple of hours we spent there were quite enjoyable. Cold beer was available from the bar and once a small gate had been opened to allow us access to the beach, Tracey and I went for a relaxing walk, photographing the boats and pelicans perched on the boats. Due to the forcasting of a particularly heavy swell, we’ve left the quayside to spend the evening anchored outside of the harbour. The captain described it as us moving out ’10 cables’ distance from the harbour, which I understand to be a very old nautical term; I have no idea what distance that actually is… In the morning, we will be returning to the port for our second day in Manta…

It’s come around again so quickly; it only seems like yesterday that we were coming home from the Minerva and the Black Sea.

Tomorrow, I will be joining the Marco Polo for its 50th Anniversary Commemorative Cruise to Greenland and Canada… Happy Birthday Marco Polo!

There’s still a bunch of packing to do, but I have mountains of art materials bagged and ready to go, and lots of workshops to keep the passengers happy.

Fortunately, it won’t be an early embarkation, which means I don’t have to be up at stupid o’clock to travel to Tilbury. In fact, I’ve had notification that the Marco Polo has been slightly delayed on its return to the UK, through the Kiel Canal, meaning embarkation won’t be starting until about 6pm tomorrow, with a predicted sailing time of around 9m. That’ll be a lie-in then… 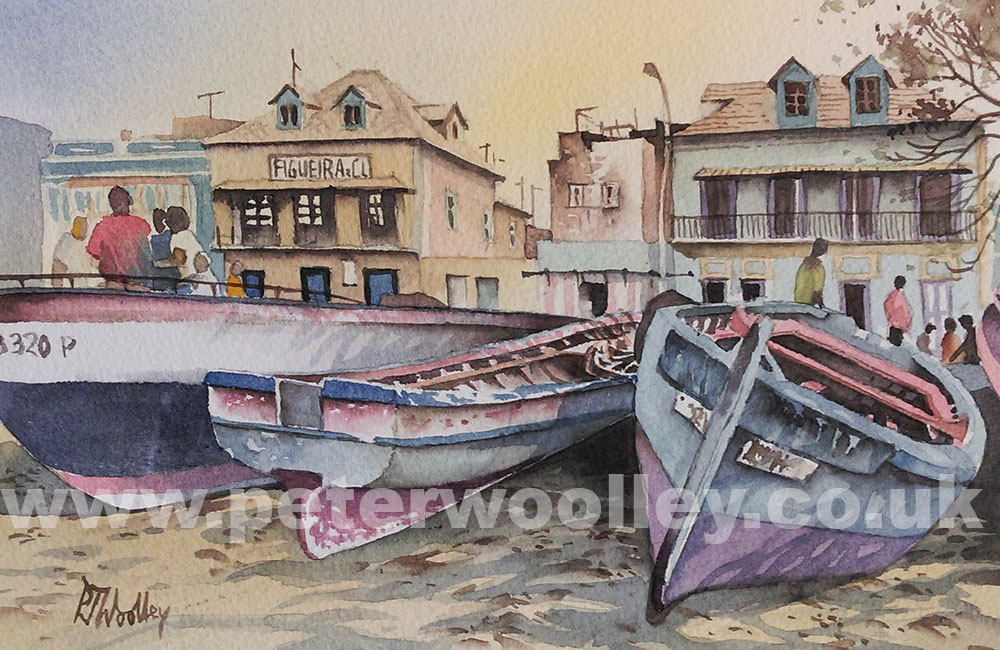 People are funny, aren’t they? I’m on Deck 4, right down in the bowels, at the back end of the ship. I emerged for breakfast at around 8am, and noticed, as I reached the bottom of the stairwell that leads up to higher decks, that the lift doors were open and that two men were working on it. I don’t know what they were doing, but they had toolboxes open, and seemed to be fixing one of the metal strips on the floor and laying down some new carpet. At the same time that I passed the lift, another gentleman appeared from the other side of the ship. We both briefly paused to glance at what was happening with the lift, then proceeded to head up the stairs (which is what I do every morning anyway – I haven’t used the lift yet…. I often wonder at how awkward it must be, though, for people who are on that deck, and who are are unable to use the stairs when the lift is out of action). So, I let the other chap go ahead of me, and we headed up the stairs…

At the next landing; blow me if the chap didn’t go up to the lift, press the button and wait.

I felt obliged to suggest to him that the lift probably wouldn’t arrive, since we’d just seen it being worked on, on the floor below. He shook his head, looking slightly embarrased, but I couldn’t help wondering, as I left him and dashed upstairs (Marcos is on Deck 8), if he simply cimbed another flight of stairs and tried again.

Today has been another day at sea. I spent the morning completing another Mindelo Boats painting, and this afternoon I had the classes painting figures. It was very much a ‘play’ session, where the emphasis was on exploring methods of creating figures in their simplest forms, to populate a landscape or a street scene. Most people seemed to enjoy the open-endedness of it, without a fixed target, the pressure was off… all very enjoyable!

Tonight was our second formal night. Again, I didn’t feel like dressing up (what Neil Bonner calls his ‘Penguin’ costume). It’s far too hot and humid, and not having anyone to swan around with is a bit of a downer. Instead, I ate dinner in Marcos with Peter Counsell and his wife, Jean, and purchased a couple of cans of beer and a glass to take down to the cabin.

As we sat eating, the heavens opened up. Outside, the Pool Deck was quickly evacuated, and staff brought down the large sun parasols, to avoid them being whipped away in the sudden high winds. The rain was so intensive that the outer edges of the deck soon became flooded, and passengers looked on mesmerised; quite a spectacle, actually. It was a good job we’d had the ‘Summer Buffet’ the night before. Having done this trip four times before, I don’t recall ever having seen any rain at this particular point in the trip.

The rain persisted for an hour or more; it was still falling heavily when I bid farewell to Peter and Jean and headed to the cabin for an evening of movies (Nightcrawler… excellent film!), The Sopranos, chocolate and beer.