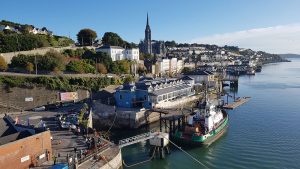 Today, we arrived at our final port-of-call, Cohn (pronounced ‘cove’), in Ireland.

After our underwhelming Ireland visit earlier in the year, to Ringaskiddy, which is literally just across the other side of the bay, I’m pleased to say that todays visit to Cohn did not disappoint at all.

Cohn is a rather idyllic little town, but one with an important place in history. With a population of only 12,800 residents, it was renamed Queenstown in 1849 after a visit from Queen Victoria, and returned to its orginal name sometime after (no-one seems to know exactly when). On the 11th of April 1912, it was the final port of call for the Titanic before she set sail across the Atlantic Ocean on her maiden voyage. Sadly, we all know how that turned out.

Cohn also had a major shipbuilding industry at one time, and it is from here that many convicts were shipped off to Australia. 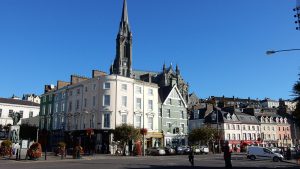 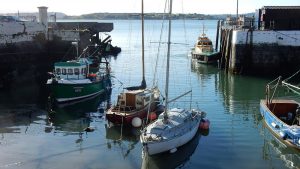 We’d specifically asked not to be put on tour today, because we wanted to explore Cohn at our own leisure. Once ashore, we ambled along the waterfront, enjoying the warm September sunshine and being spoken to by a friendly local crow (or raven – I’m not sure which). Twice, I swear, it said “hello” to me, after which, like a loon, I kept trying to engage it in conversation, but it was having none of it.

We walked the length of Cohn’s shoreline, as far as the Titanic Memorial Garden, where the names of the 144 people who boarded the ship here (only 44 came back) are listed on a giant plate glass sheet bearing an outline of the vessel. 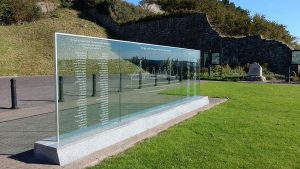 It being only a half-day stop – mostly for 160 Irish passengers to disembark the Magellan – there wasn’t time to climb the hill to get a closer look inside St. Colman’s Cathedral – that will have to wait until another visit. Instead, there was another, more important task to be done… when in Ireland, one should drink Guiness…

We found a pub near the ship and I enjoyed a pint of Ireland’s most famous brew before it was time to head back (and stunning it was, too).

We left Cohn at around 1pm.

Tomorrow, we’ll be arriving back at our starting point, Bristol, and another adventure on the high seas will be over.

But not for long…

I’ve been invited to join the Marco Polo in January for a ‘Grand Circle South America’ voyage. It’s going to be quite a marathon, crossing the Atlantic and circumnavigating the entire continent of South America, taking in Brazil, Argentina, Chile, Peru and dropping in on the Falkland Islands, to mention just a few scheduled stops. Naturally, I’ll be keeping a blog of the journey, warts and all…

Today was our last full day at sea. Tomorrow, we are due to arrive at our final port-of-call, Cohn in Ireland, and then the day after that (Sunday), we will be arriving back where we started, at Bristol.

It felt like the last day of term for me, with the last of my classes taking place in the afternoon. I was up against the Passenger Talent show, which definitely had a minor impact upon numbers, but the turnout was good, nevertheless, and ‘Negative Painting’ was a fitting finale session. Unfortunately, with many passengers getting off in Cohn tomorrow, an exhibition hasn’t been practical. Everyone seemed happy with what they did, though, and in the immortal words of Mary Poppins and Bart Simpson; my work here is now done.

Today, we have been at sea, heading Northwards towards the Bay of Biscay and Ireland.

I was on afternoon shift again, which meant we were able to get up at a reasonable time and enjoy a leisurely breakfast.

After breakfast, at 10am, we went into the Show Lounge to enjoy an on-stage talk with The Captain, the Chief Engineer, The Hotel Manager and the Head Chef, presided over by the Cruise Director. It’s a format that we’ve seen many times before on other cruises, and one that can be very entertaining, as it was today. 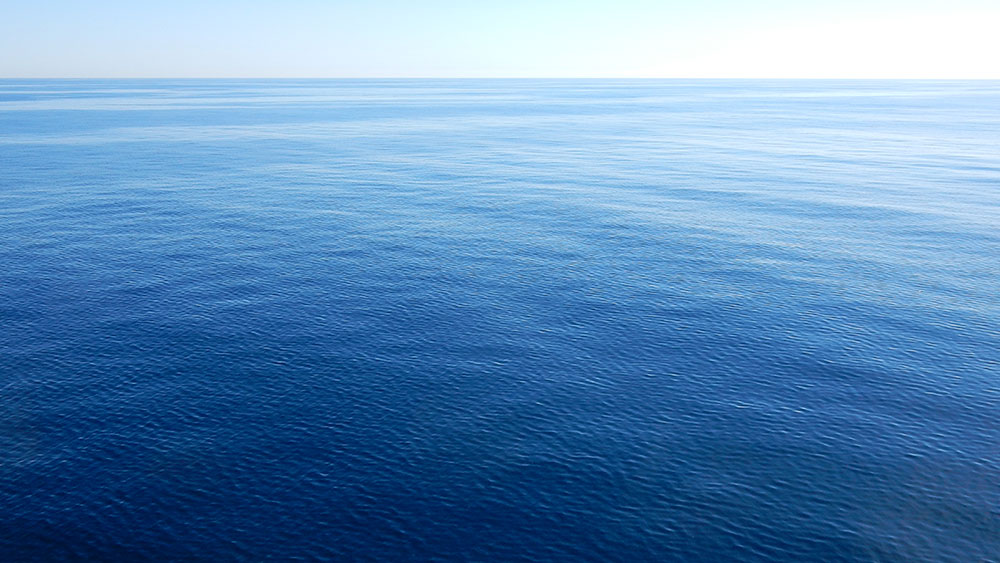 After the ‘Life at Sea’ show, we went out on deck to enjoy the fresh air and the sunshine; at the front of the ship it was a little breezy, but not cold at all. What was amazing was just how flat the sea was; not a white breaking wave to be seen anywhere, and barely any swell to the sea at all. It was so nice up on deck, and the sea was so smooth, that we decided to spend what remained of the morning there, looking out for life. When the sea is that smooth, the surface is so unbroken that if there is anything to be seen, then providing you’re looking in the right direction, there’s a high probability of seeing it. As it was, we saw very little; there was a bird that Tracey thought might have been a young gull, and on two occasions, the surface was broken by something that we assume was probably dolphins, but could just as easily have been porpoises or even large, jumping fish.

The wildlife count did improve throughout the day, however. After running my penultimate class, in which I gave them the Composition Checklist and had them painting simple figures, we spent some time down in the cabin, and saw some dolphins passing right outside our cabin window. Later, it being Formal Night, we were up on deck to watch the sunset and take a few photographs in our posh garb, and saw a whale break the surface of the sea behind the back of the boat. 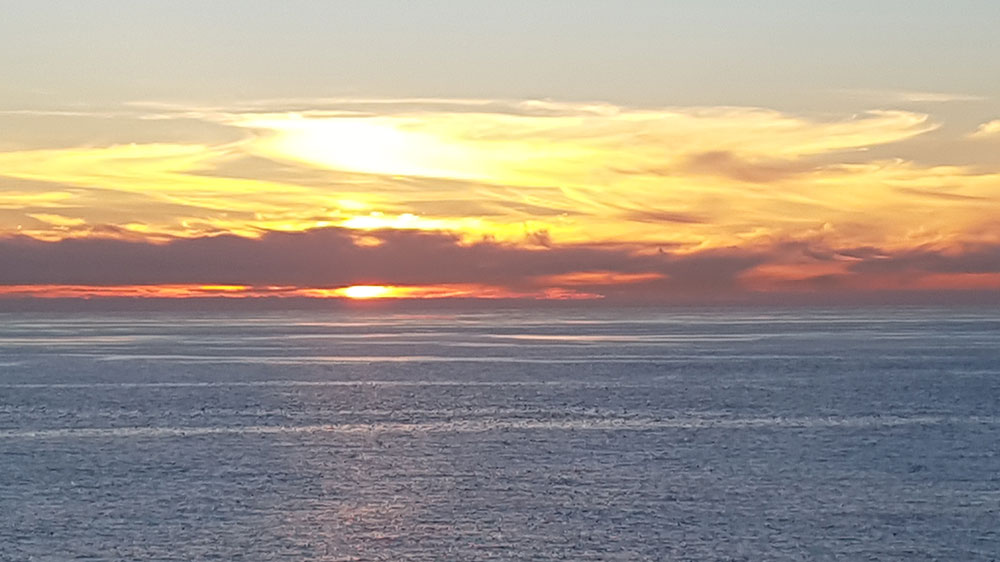 Clocks go back tonight, so we’re back in line with the UK. This gave us an extra hour, which we spent drinking tea and watching M*A*S*H in the cabin (we know how to have a good time).

Today, we arrived at our penultimate port stop, Gibraltar.

It was an early start; both Tracey and myself were down for escorting duty, and had to be on the quayside for 7:45am. That meant bounding out of bed at 6:45am to get an early breakfast in – not a time we’re used to at all.

The tour we were escorting today was titled ‘Walking Tour – The Upper Rock’, the first leg of which was supposd to be to the cable car. However; because the cable car wasn’t due to open for another 20 minutes, our guide, Karen, decided to have the driver, Johnny, take us around the outer perimeter road that circumnavigates the rock – a nice little bonus to start the tour off with, which also enabled everyone to get some idea of the Rock’s proportions.

When we finally arrived at the cable car station, the ride up to the top of the rock only took 6 minutes. Once there, we had our first encounter with a few of the 300 apes that live on the rock. The Barbery Macaques have been residents here for many hundreds of years, and are protected. It is said that should they ever leave, or be forced to leave, then Gibraltar would cease to remain in British hands. 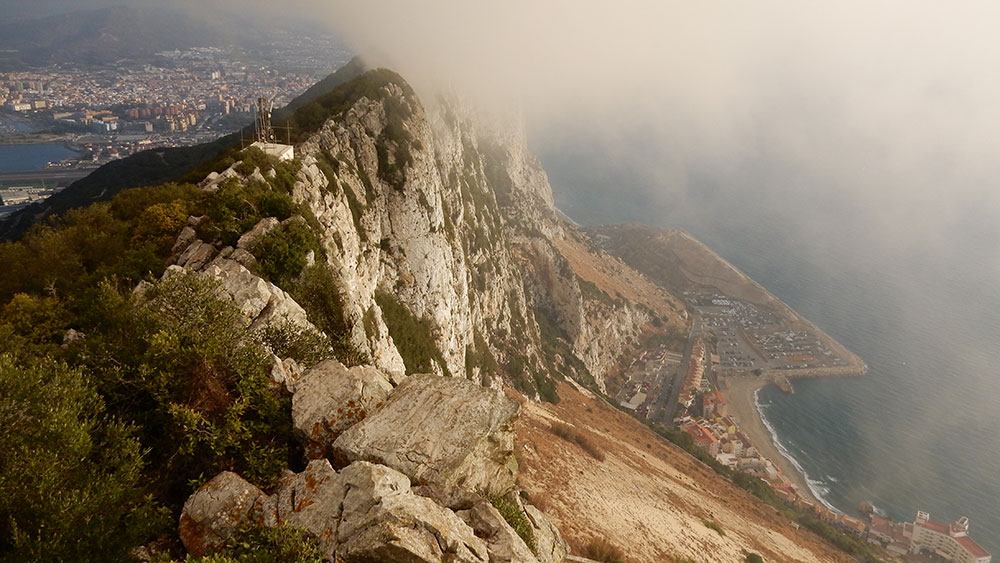 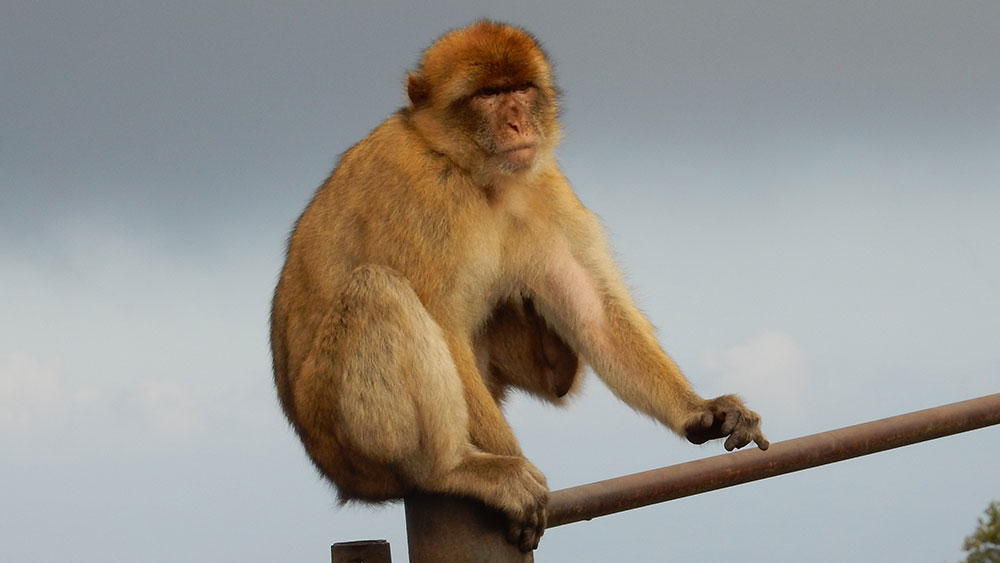 There are signs everywhere, reminding visitors not to feed the apes. They are wild and untamed, but they are fed regularly by a team who keep an eye on them, monitoring their numbers and tracking their whereabouts. Visitors are also strongly advised to keep food out of sight and any bags or accessories that can easily be snatched, because the apes will make a beeline for them. Touching the apes is also discouraged because you’re likely to get bitten as a result.

After a brief photo stop at a large viewing platform, which provided us with extensive views in all directions, we proceeded to walk along the rock’s ridgeline, past a new glass-bottomed ‘Skywalk’ platform, which was opened relatively recently by Luke Skywalker himeslf (Mark Hammill), to St Michael’s Cave. 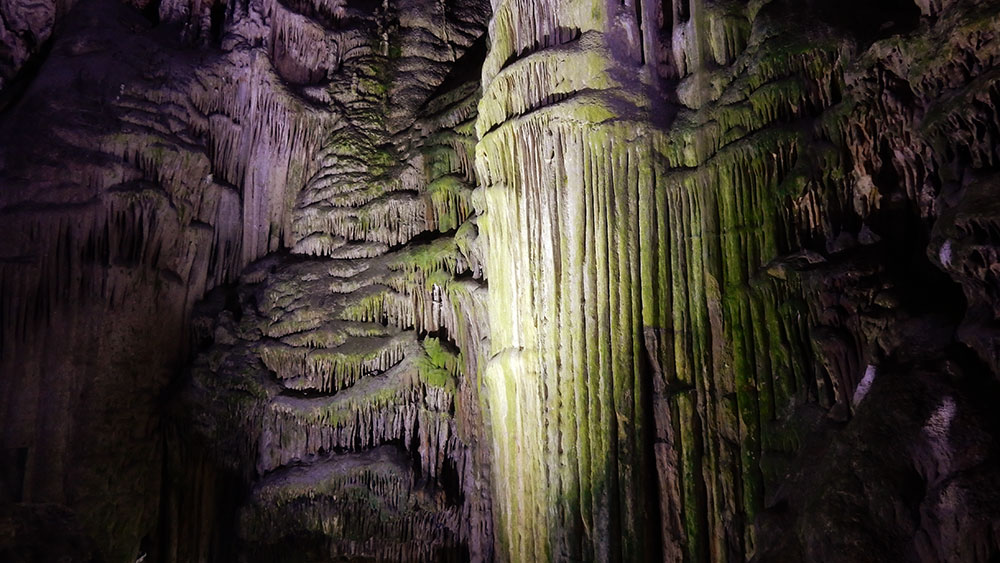 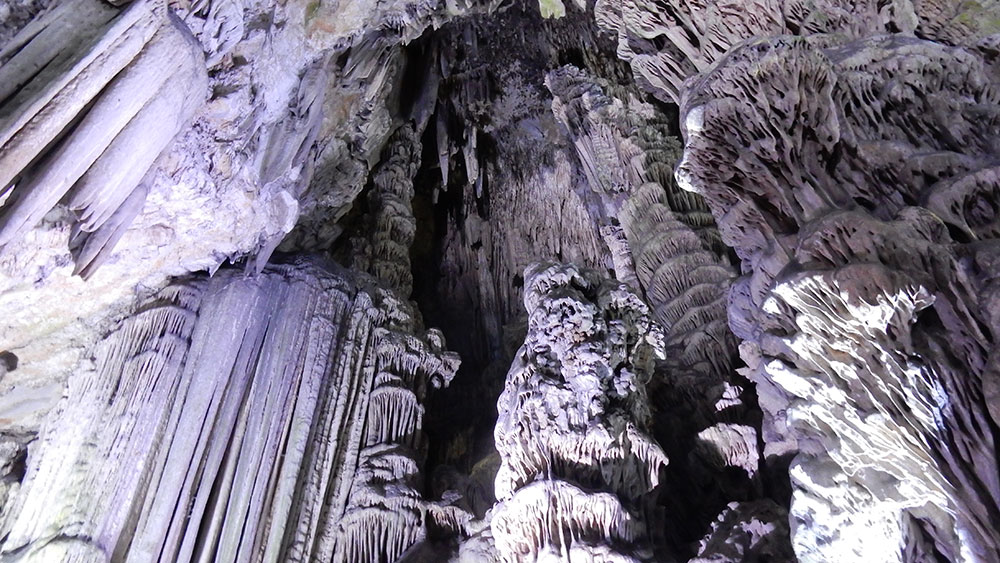 St Michael’s Cave is an impressive natural amphitheatre that boasts incredible rock formations and acoustics, making it the setting for many regular concerts. During the Second World War, it was commandeered, and modified for use, as a military hospital, but was never used for that purpose.

I should say at this point that the guide on my minibus was particularly good. As an escort, I have to monitor the tour to make sure that it is as advertised, and write up a short report at the end of it. I’m also asked to grade the guide. Nine times out of ten, if I’m happy with the guide, then I usually put them down as ‘Good’. It’s rare for me to grade them as ‘Excellent’, but Karen did just that. As an ex-naval person herself, her passion for her subject was tangible. Her explanations of historical events that have helped shape the island had the group hanging on her every word – a rare thing indeed, for me (with most guides – even relatively good ones – I often find myself zoning out of what they are saying).

And so it was, at out final stop, as we walked through the Seige tunnels, Karen brought the life and times of the people involved with the digging out of the many tunnels that now exist in the rock, to life. 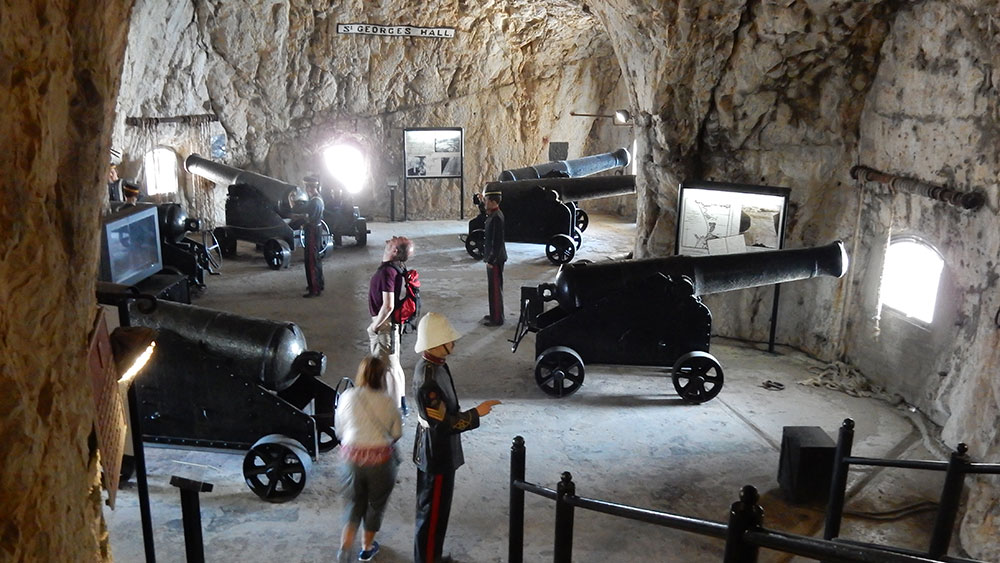 Gibraltar hasn’t always belonged to the British. It was originally settled on, and inhabited by the Arabs. Since then, it has fallen to the French and the Spanish, and finally to the British. In the Great Siege of 1770, the Spanish tried to take it back, blockading it from all sides, land and sea in an unfair standoff of roughly 5000 British to 50,000 Spanish. For three years, the Spanish sought to take the rock by starving them out, but the British held steadfast, digging tunnels through the rock that enabled them to place cannons more strategically, effectively turning the Rock of Gibraltar into a mighty, impenetrable fortress. I was so swept up in the history of the Rock that I couldn’t help wondering why there has never been a major Hollywood movie made of it… come one Spielberg… Get your finger out!…

All-in-all, this was one of the better tours I’ve been on, and I was pleased to be able to see parts of the Rock that I’ve never seen before. In fact, despite having been to Gibraltar on two previous occasions, this is the first excursion that I’ve done here since my first ever cruise back in 2006, when I visited it on the Saga Ruby (‘Christmas in the Mediterranean’).

It would have been nice to have been able to spend longer there, but it was only a half-day stop, and I had a class this afternoon.

Now, we are back at sea, and heading back towards the Bay of Biscay and our final port-of-call, Cohn, in Ireland, where we are due to arrive on Saturday.

Today, the sea has been calm all day. I was on morning shift for my class, which left the rest of the day for doing other stuff. After lunch, we managed to bag ourselves a seat in the garden area at the very back of the ship (which is extremely popular, and it can be very difficult to find a space most of the time).

Other than a minor accident, when one lady fell over and badly injured her leg, resulting in her being whisked away on a wheelchair, the afternoon passed without incident (I say ‘minor’ – actually, it seemed rather serious; there did seem to be a large amount of blood). The seas have been calm and the sun has been shining. With hardly any wind, it’s also meant that it has been quite hot out on deck, but with only a few more days of the cruise left, most people seem to be trying to take as much advantage of the weather as possible before returning to cooler climes.